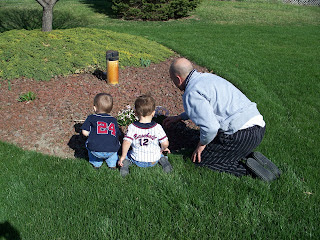 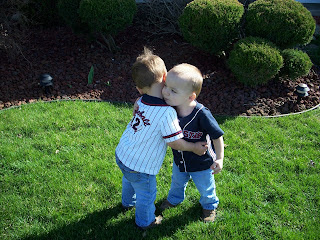 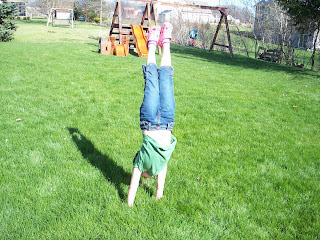 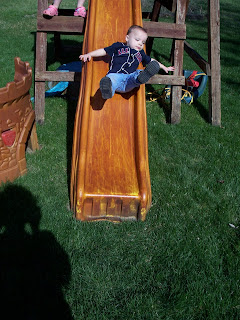 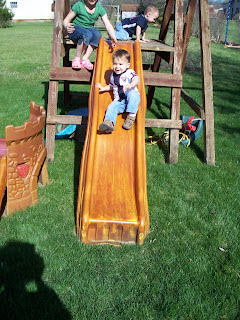 Since it was finally nice today, we went outside. Mike showed the kids how to search for bugs. Fun, fun, fun...
Posted by Allison at 9:47 PM No comments: 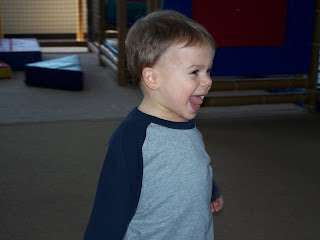 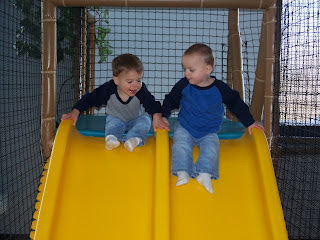 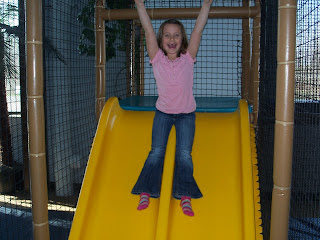 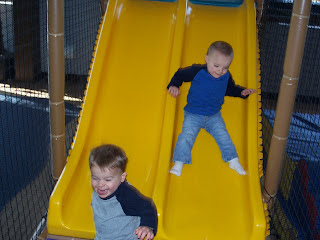 We enjoyed our time at the Castaway Cafe last weekend.
Posted by Allison at 9:43 PM No comments:

This is a post I did several days ago and just finally got back to.

I took Owen to the Pediatric Cardiologist today for a check up at Children's Hospital. It had been a year since our last visit. Fortunately, last year after an EKG, Eccocardiogram and 24 halter monitor, the Dr. told us we were in pretty good shape. He had been off of meds for 6 months and although there was still some premature jumping of beats, things were much improved and we were to ride it out. So, a year gone by and we got great news today - Owen's EKG was completely normal! There did not appear to be any acceleration or irregular beats. Yeh! He did say that we are not completely out of the woods and that this could come back (most likely in the early teen years) but for now, we look good. The best words were - "see you in 3 years". The days seem long ago that we were listening to his heart 6 times a day and giving doses of albuterol every 4 hours. Praise the Lord!

On a different note, there is something that I want to share. There is this boy (young man) whom is a student at Cranbrook. I have only met him a few times. I first found out about him when I went to give blood at a blood drive at work. There was a sign that read "If you are of O blood type and willing to donate blood for Miles Levin, please contact ..." And so I did and then I proceed to give blood at a bank especially for this boy. I knew he had some type of cancer but that was it. Now he is not doing so well. He is in NY getting basically a last chance chemo treatment. If this treatment does not do some major work, he will not be strong enough to recover from it. I was told that he has a carepage, similar to a blog and so I began reading. I now am consumed by it. I read or look for updates on this amazing boys life many times a day. He has courage that I have never seen in my life time, an indescribable ability to write and the guts to discuss anything about death. I am copying a page from his site that truly moved me and sums up his take on life. Please read...

Part of the power of Carepages, I've been told, is that it resonates a certain authenticity, free from pretense. But I'm sure many of you must wonder sometimes, "Wait, how could he not be upset about what's happening to him?" So free from pretense and sugar coating, I will say, no, this not what I had planned.

I come back to the analogy of the baby drowning in the river and getting angry at the H20 molecules. I'm not angry because there's nothing to be angry at. Anger requires a target. You have to be angry AT something. There is no target, there are only abnormal cellular processes.

So I'm not angry. This is how it is. But I am so terribly sorry that this is how it has to be. I so badly want to live. I have great enthusiasm for life; that probably shows. This is the first carepage update I've ever written through tears. I just want to live. NPR Columnist and cancer patient Leroy Sievers says it for me best: "I'm not scared to die, I'm just not ready."

It was hard for me at school when all my friends got worked up about the colleges they had not yet heard back from. So much talk about colllege. It was hard to hear. Firstly, all that stressing about which Ivy League they'd be going to while I'm stressing about whether those suspicious scans meant cancer and The End or not; and secondly, that everyone would be moving on to the next stage of life...the whole College Experience...onwards to young rising professionals and newly weds and fathers and mothers and grandfathers and grandmothers and retirees...but my life ends here; this is my stop, a couple months short of graduating high school. The truncation is so harsh. That's what hurts the most. There's so much more I want to do. And I know I have more to give. I got the short end of the stick, and while I'm not angry (at a stick?), I'm painfully saddened and disappointed. My own life is the most tragic thing I have ever known. How many people can say that free of melodrama?

I try to hold in mind that all you can do is work with what you're given, and I pretty much made the most of it. I'm proud of that. Whether you live to be 18 or 81, your tenure on this earth is still fleeting. For the happy and healthy, it will always be too short. Given this, all you can do is do some good, I suppose, and find a couple things to laugh at in between. I've done that.

Most of the time I'm not sad. When I feel well, I'm happy. But when I'm feeling happy and well is when I realize how much I enjoy this whole thing, how much I'll miss it (although I don't think I will be capable of missing it once I'm gone)--and that's when I have the hardest time letting go.

This is, as I titled it, The Disappointment Essay. I've always appreciated a quote on the way things are by Hunter S. Thompson. "It's a strange world," he wrote, "Some people get rich, others eat shit and die. Who knows?" That seems about it. And who knows?

Who knows. I believe through cancer I was able to rise, coming respectably close to self-actualization. Maybe I never would have gotten my act together otherwise. Into adulthood, I might have been scattered, eternally five minutes late to life. Maybe this has put my good where it will do the most. I can only hope so.
Posted by Allison at 8:45 PM No comments:

So I got this new camera and a new computer but I don't know how they all work together and therefore all recent pics continue to be stored on the camera.

All is well with the Mitchells. Mike has been away at a conference for 3 days but has finally arrived back in the state, I think. Of course at 8:30pm he is still at work so as far as I know, he could still be at the conference.

The kids are good. Janie is on spring break and fortunately has done a few fun things with friends. Last night I took the kids to Castaway Cafe in Howell and we had an absolute blast! It was so perfect for all the kids and something to do outside of the house.

The good news is that we have reach, actually exceeded our goal for the March of Dimes walk. Thanks to many generous friends and family, we have raised almost $1300. If you still want do donate look at the last post for the link (since I don't remember it now)

One final thing - I have a friend that I have gotten to know through the NICU at St. Joe. She has amazing twin girls (born at 24 weeks)who have overcome the impossible time and time again. Holland is back in the hospital for the second time in a week with pneumonia. They are great people but have definitely had their share of life obstacles. They need all of our prayers to once again find the strength to get through this one too! Holland Edens blog is linked to mine if you want to read.
Posted by Allison at 8:27 PM 1 comment: 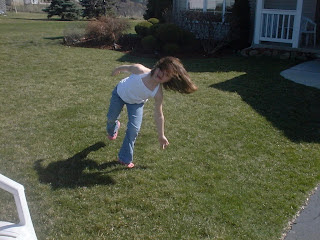 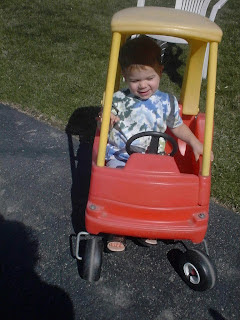 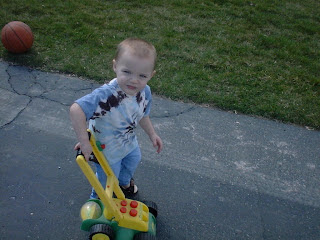 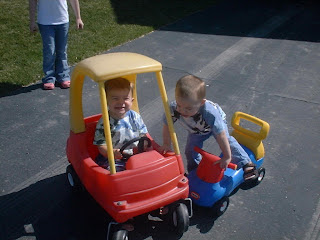 So it was all a tease but we had some fun for a few days anyway! It is so great to get outside with the boys now that they don't dart for the road.
Posted by Allison at 10:16 AM 1 comment:

We will be walking again this year in the March of Dimes Walk as the family team OK Twins. This is such a great time and an awesome opportunity to support prematurity in honor of our boys. Our fund raising goal of $750 has yet to be achieved. Thank you to those of you who have donated and I hope that many more will find a small gift to give us towards this journey.

Here is the link if you would like to donate!


Some pics from last year... 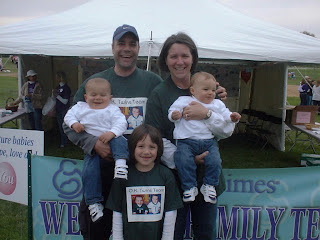 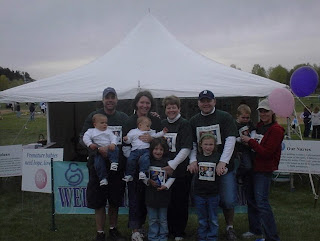 Posted by Allison at 7:29 AM No comments: 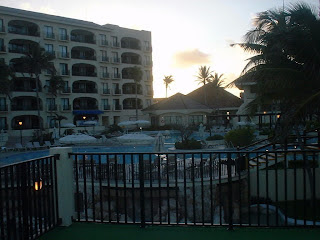 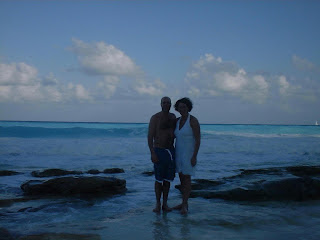 That is exactly what it was, a dream. I had the most amazing vacation to Mexico that I could have ever asked for. It was exactly what I wanted and more. Really I had just wanted to relax, enjoy my hubby, bask in the sun and eat good food. That all happened! We did do a few other things during our short 4 days! We enjoyed Isla Muejes, went snorkling, had a boat ride, checked out several beaches, ate some serious good grub in downtown Cancun, shopped a bit, road a lot of city busses and had a blast talking in Spanish. 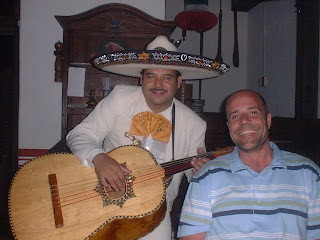 I have made a list of things that I did not know about Cancun before I visited:

-You can go and not have to be part of the spring break partyfest
-Apparently if you are into the "bar scene", the more wrist bands you have, the cooler you are
-The city busses are cheap, take you anywhere on the main road, a good people watching tool and like a visit to Cedar Point!
-There is some seriously poor housing in Cancun but once you arrive back to the resorts, it is like being in an entire different world
-Real Mexican food is nothing like Chi chi's
-15sp sun screen is like wearing baby oil in MI
-Happy hour starts at 2pm
-Mexican's are so nice, friendly and hard working (I kind of already knew this) and therefore I offered about 5 jobs while I was there
-You can really use the Spanish that you learned in High School 15 years later
-Cancun airport is much more efficient than Detroit
-This is a place that I would definetly take my children 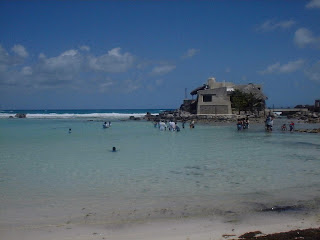 Also on this trip I discovered a few personal things -

-I love spending time with my husband
-I can have an adult conversation with my husband about something other than bills, kids and jobs
-I can read! I can read something other than childrens books
-I don't just sit around well. As much as I wanted to be lazy, if I was not reading or sleeping, I enjoyed being active.
-My kids were okay without us for 4 days
-I want to take a trip with Mike every year. Is this possible?

I feel refreshed with a bit of the blues. I love my life here. I love my kids. But...I LOVED THIS VACATION!